I got to put my American naivety on display in the morning, following a good Irish breakfast at the hotel café. I realized that I hadn’t put a tip in our hotel room for housekeeping. I pulled out €20 and headed back up the stairs where housekeeping had finished up with our room. I went up to the maid to offer her the money, but she stared at it uncomprehendingly. Equally bemused, I explained that tipping maids was a typical American custom. She shrugged off the money with a small smile. “It’s my job,” she replied in a heavy eastern European accent.

Much of our day was devoted to exploring Dublin’s city center. We hopped on the red-line tram into the city, hoping that we would see our new friend there. No such luck.

Upon arrival, we made our way to the Trinity University campus where we paid a visit (and €7 each) to its celebrated library. 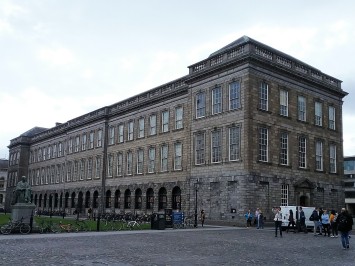 The first floor of the library contained a gift shop, along with an extensive exhibit about the Book of Kells, a ninth-century “pocket” Bible. Sadly, we could not see the actual book due to some issues with the display. The second floor was the Long Room, a beautiful, vault-ceilinged, bust-bedecked expanse, decorated in dark wood. Floor to ceiling shelves filled with old texts lined the room on either side.

All it took was one word.

Traveling back on the tram later that day, Tim and I struck up a pleasant conversation with an Irishman. We compared notes on various aspects of our respective countries; politics, holidays, food—the important stuff. I think that one of the most enjoyable things on this trip has been the chance to talk with all sort of people.

I think that my Irish accent has been improving since my arrival in Dublin, although I use it mainly in jest. Tim and I have picked up on some of the lingo, though I’ve been a little too self-conscious to put it to use (“Hey look, that dumb Yank is trying to sound like one of us. How…precious.”). One of the terms that we heard around Dublin a lot is “Cheers!” (for thanks). I wonder if when I return home, I’ll have a whole new vocabulary. Stayed tuned, mates.

Overall, our visit to Dublin has been a great experience. The people we encountered were very lively, diverse in culture, and possessed an open-faced friendliness that you don’t often see in big cities.

That evening, we said “cheers” to Dublin, and headed southeast to County Cork. Our host house was located on a farm near Dunmanway.

It was quite a drive. The remnants of Tropical Storm Helene rained down upon us as we navigated narrow, windy, darkened rural roads. In the end, we found our home without too much trouble. Our host Dorothy, greeted us at the door and showed us into her home, a beautiful place constructed by two of her sons. Once we unloaded our luggage, we entered into her living room/kitchen where we were greeted by her little dog Riyah

and Chris Tomlin music playing from the stereo. Tim and I immediately knew that we were staying with a fellow believer. Over homemade scones, she told us her story about how she came to know Christ, the struggles she had to endure, and her passion for missions. Her story was both heart-breaking and inspiring.

God had clearly made His presence known in County Cork.