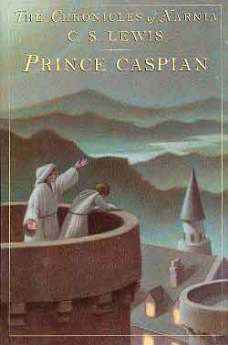 It starts out to be a dull and dreary day for Peter, Susan, Edmund, and Lucy. School is to begin and the four siblings sit alone at the train station waiting for their train to come and take them away. It has been a year since the children first stumbled into the land of Narnia and, with the help of a powerful lion named Aslan, overcame the White Witch and her spell of eternal winter. In fulfillment of ancient prophesy, the four were crowned the Kings and Queens of Narnia. There, they ruled for many years until they stumbled upon the wardrobe portal which brought them back to England where time had virtually stood still. Now, one year later, the wonders of Narnia seem like a distant dream.

Meanwhile, hundreds of Narnian years pass after High King Peter and his siblings mysteriously vanish. Their castle at Cair Paravel is now in ruins and the land has been taken over by a foreign power, the human Telmarines. Ruling Narnia is the evil King Miraz who does everything in his power to wipe away the Narnia of old. The stories of Aslan, Peter, Susan, Edmund, and Lucy are viewed as myths and few even believe them. However, one of those who do believe is Miraz’s nephew Caspian, the rightful heir to the throne. With the help and training of his tutor, Caspian flees Miraz’s castle and gathers together a remnant of the creatures from old Narnia to do battle against the Telmarinian army. The fight is not going well for Prince Caspian and his ragtag army. As a last resort, he uses the legendary horn of Queen Susan in an attempt to summon the return of Aslan and the Sons of Adam and Daughters of Eve.

Will the horn actually work, calling forth the heroes of old Narnia to come to the rescue, or is it all just a faded fairy tale? The sequel to The Lion, the Witch, and the Wardrobe, C.S. Lewis’ Prince Caspian draws Peter, Susan, Edmund, and Lucy back to the into the flow of events that continue to shape the land of Narnia.