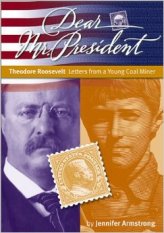 “I heard at work about that President McKinley got gunned down by a crazy fellow and now you are president…I have advice for you…don’t let no crazy man near you. They is almost always trouble…”

With that, thirteen year old Frank Kovacs begins a friendly and informative correspondence with newly appointed president Theodore Roosevelt. Throughout the series of the letters from the White House, Frank learns about Roosevelt’s life, as well as his family, and their wide variety of pets.

What the President learns about Frank, however, will profoundly change him, and help to spur on events that will change the country as well. Frank is miner from the Pennsylvania coal country. His immigrant family members also work at the mines. Despite the long hours, and the dangerous nature of the work, the Kovaks and other miners earn almost nothing because of the greed of the coal companies. Roosevelt is shocked to hear that a young boy like Frank is forced to work in a mine all day to help support his family. “A boy must have fresh air and sunshine,” advised the President, “I hope you have your time to be a boy.”

To protest their poor treatment, the coal miners, including Frank, go on strike. With winter coming on, the entire country begins to worry about how they will be able to heat their homes without the much-needed fuel. In the end, President Roosevelt steps in and settles the dispute peaceably, although he confides to Frank that he would have preferred “thrash[ing the coal company owners] all down Pennsylvania Avenue and back again.” As a result of the settlement, miners will be paid more and their working conditions improve.

Although the correspondence between Frank and Theodore Roosevelt is largely fictional, the events surrounding the boy and his president are true. They reveal a crucial time in our nation’s history. In a time when big and corrupt businesses treated their workers like animals, Roosevelt stepped in to give people like Frank dignity, and to give them a chance to live the American dream.