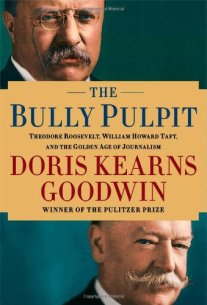 Another fabulous book by Doris Kearns Goodwin! This time, she takes the reader through the tumultuous years of the Progressive Era at the beginning of the 20th century. At the center of the storm is the irrepressible Theodore Roosevelt. Yet, I was intrigued, not by the story of Roosevelt, but of William Howard Taft. Knowing little about Taft, I was deeply impressed by his political and judicial achievements, as well as his personal character. Coming down through history, he has been seen as a portly, well-meaning bungler (this view ironically propagated by Roosevelt himself). I think Taft’s only real fault was that he was the wrong President for the times.

Another fascinating topic that was covered was the rise of progressive/muckraker journalism which did much in the raising of public awareness of big business corruption, unhealthy working conditions, and high tariffs. Leading the charge was magazine editor Sam McClure and his idealistic staff of writers such as Ida Tarbell, Ray Stannard Baker, Lincoln Steffens, and William Allen White. It was also interesting to see how Roosevelt used and worked with the journalists of his day to promote his own progressive policies.

If you’re sick of today’s do-nothing government and the dubious work of the media, this book is a refreshing reminder that people of differing political views can work together to affect change.