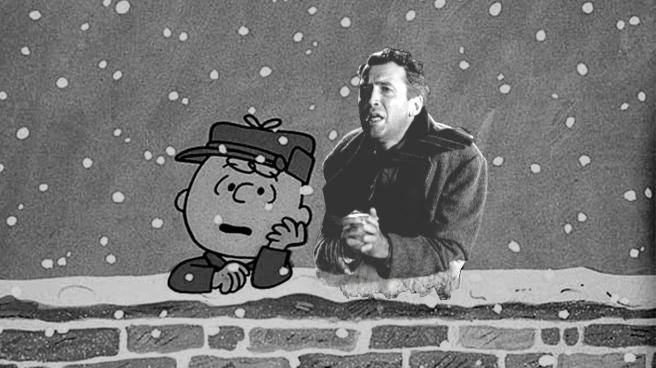 Disclaimer: ‘Tis the season for another writing project! Recently, while at a rehearsal for my theater group’s production of Miracle on 34th Street, I was speaking to a fellow cast member about how it would be fun to do a play in which all of the major Christmas movies were combined into one story. Unfortunately, I won’t  be able to squeeze all of them in, so I picked a couple of the more “classic” tales to mash up. I have tried to include as many original movie quotes as I can; so for the most part, the dialog won’t be entirely mine.

(Charlie Brown walks along a picket fence. He stops and leans against it and sighs)

Charlie Brown: I think there must be something wrong with me. Christmas is coming, but I’m not happy. I don’t feel the way I’m supposed to feel. I just don’t understand Christmas, I guess. I like getting presents and sending Christmas cards and decorating trees and all that, but I’m still not happy. I always end up feeling depressed.

(As Charlie Brown is speaking, George Bailey slowly walks along, deep in thought, with a stick that he idly runs along the fence. He hears the last part of Charlie Brown’s conversation and stops.)

George Bailey: (Stops next to Charlie Brown and also leans against the fence) You think you have problems? What are you, five? Look at this. (He pulls out several travel brochures from his coat pocket) Travel brochures from all over the world. Places that I’ve always wanted to travel to, but now I can’t. (Sighs) Do you know what the three most exciting sounds are?

Charlie Brown: Do you know what another exciting sound is? The sound of a full mailbox opening.

George Bailey: Really? What sound does that make?

Charlie Brown: I just came back from checking…again. Nobody has sent me a Christmas card today. (Pauses) I know nobody like me. Why do we have to have a holiday season to emphasize it?