After a delightful continental breakfast served in our B&B’s dining room, Tim and I took our leave and set out to explore Edinburgh in the daylight. The weather proved to be overcast and windy for much of the day. In addition, our time was limited because of our approaching flight back to Dublin that afternoon. Still, we had plenty of opportunities to gawk at some old buildings and to enjoy the performances of several street musicians, including a kilted bagpiper. Our wanderings took us to Calton Hill, a prominent outlook with a panoramic view of the city.

Sadly, the time quickly flew past, and we regretfully had to say our goodbyes to Edinburgh and make our way to the airport. Although, not in our original trip plans, Edinburgh proved to be one of the highlights of our vacation! We barely scratched the surface of what the city had to offer, and we hoped for a return visit someday.

Upon our arrival at the airport (which I was pleased to note no longer smelled like a barnyard), we hopped aboard a small Aer Lingus plane, and within an hour, we were back in Dublin, our home away from home it seemed. After collecting our excess luggage (and paying a steep price for leaving it at the airport), we picked up our third rental car, and drove north to Howth, a tiny village located on a small peninsula that jutted out into Dublin Bay. 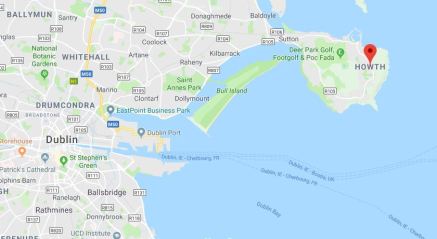 Our final Airbnb host home was a private beach house that sat along the southern shoreline and had a stunning view of the bay.

Our host welcomed us warmly, made us tea, and we sat together at her dining room table, looking at the bay through large windows, and having an enjoyable conversation. After all the walking and hiking we did throughout our trip (and in Tim’s case, biking and kayaking as well), our final stop in Ireland proved to be very restful. We learned that our host, her husband and daughter had recently moved to Howth from the south of England (which she strongly encouraged us to visit on our next European jaunt).

Upon our host’s recommendation, we had dinner at the Dog House Blues Tea Room on Howth’s main drag. 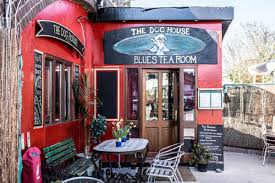 It was a very unique place in terms of décor. The interior looked almost like a grotto with low, rounded archways, unfinished stone walls, and a rounded ceiling of brick. The waitress said that the building used to be a tram station, but wasn’t sure what it was before that. It was definitely an old structure repurposed for casual dining. As to the décor, the low-lighting and rather eclectic decorations left me feeling somewhat disturbed. Many of the paintings that hung upon the red walls of the dining room depicted naked people in varying degrees of anguish. I suppose this was supposed to be trendy (something I can never claim to be). And so, I mainly just kept my head down and ate my shepherd’s pie, which was good. And despite the angst-ridden artwork, the atmosphere was very genial. When asked how my shepherd’s pie was, I told the waitress that it was the best that I had ever eaten. What I didn’t tell her was that it was the only shepherd’s pie I had ever eaten (so technically I was telling the truth, right?). But she seemed really pleased by the compliment and promised to inform the cook, so I decided to forgo further explanation.