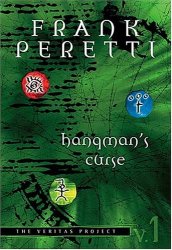 I respect any author who ventures to write Christian fiction. This is because the writer has to do a balancing act with his/her story. On the one hand you don’t want to come off as too preachy and turn off your readers. When a typical person picks up a novel, Christian or otherwise, they seek to be entertained, not to have one message or another thrown at them. Plus a lot of the entertainment factor is watered down so as not to cloud the author’s message or to offend their Christian audience. This eventually leads to a novel that makes eyes roll. You may be familiar with a few of those.

Now on the other hand, if a Christian writer goes too far the other way, the Christian community deems that writer “secular” and all his or her works taken with a grain of salt. Oh sure, the novel may be morally upright, but…does there have to be violence in it? Or do the bad guys have to act so…bad? Did you just refer to magic?! Why does this dialog have to be so grammatically incorrect? I’m almost exaggerating these complaints.

I haven’t read Frank Peretti’s works extensively, but he has a reputation as being one of the great Christian fiction writers. It was with this in mind that I delved into The Hangman’s Curse.

I came away from the book with two strong reactions. The first portion of the book brought forth a bit of eye-rolling for me. First of all, the overall premise is that the President has a secret investigating team, a family of four (complete with a drug-sniffing dog) who infiltrate various places in order to right wrongs. In this particular book, the Springfield family goes undercover at a high school suspected of being haunted by a ghost. They arrive at the school in their van “The Holy Roller” (Does this sound like the start of a Scooby Doo episode to anyone else?) and the two kids are enrolled. The brother and sister are well-liked, intelligent, self-assured, and are not afraid to hang out with the outcasts. In short, they are every Christian parent’s dream children.

Before the novel gets to the halfway point, we get hit over the head with messages about creation vs. evolution, whether there is absolute truth, and the wrongs of bullying. Not that I have anything wrong with these topics of discussion, but they tended to pull away from the main thrust of the story, and again, people tend to read novels for the entertainment aspect.

My second reaction came with the second half of the novel. At this point, the action and suspense really begin to pick up. The Scooby-Doo-esque ghost story gives way to something deeper and more menacing. I really had no idea what was going to happen until the final chapters. I don’t want to give anything away, except to say…I hope you like spiders!

I think once you get passed the beginning of the novel, you will find an excellent suspense story waiting for you.