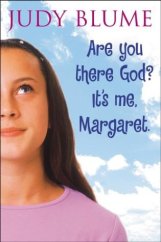 When the Jewish Herb Simon married Barbara Hutchins, who had grown up a Christian, neither side of the family approved of the match. The conflict leads the couple to turn away from religion altogether. As for their daughter, Margaret is free to explore the topic. While she keeps up a personal conversation with God about her search for a religion to call her own, Margaret and her friends experience the joys and pitfalls of their emerging womanhood.

I read this book mainly to see what the big deal was, and why this title seems to be permanently fixed on the banned book lists. Clearly, the topic of religion is a hot button issue, and after reading this, I can see how it could put some noses out of joint. With all the hype that surrounded it, I was half-expecting to throw the book across the room in disgust. True, I could have done without the details on women’s puberty (I’m blushing as I write this : ) ). Yet, even though I’m a conservative Christian, I wasn’t offended by the portrayal of Christianity and Judaism. I’m glad that the main character was portrayed as open to exploring religion.