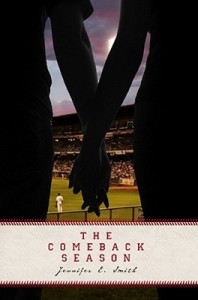 The British poet Alexander Pope once wrote “Hope springs eternal.” What better way to sum up the passions of a true Chicago Cubs fan?! For over a century, followers of the Cubs have begun each baseball season with hope, only to have it dashed by the autumn. And then it’s always “Wait till next year.”

For Ryan Walsh, diehard Cubs fan, her life during the past five years has copied that of her favorite team. Ever since her father died in a white water rafting accident, Ryan has held a faint hope that things will get better. At the same time, she focuses entirely on her past tragedies and obsesses about what might have been. While others around her have moved forward in their lives, Ryan refuses to budge.

Ryan’s life begins to change when she meets Nick, a fellow classmate and Cubs fan, as they attend Opening Day at Wrigley Field. Their friendship grows throughout the year, and Ryan learns of Nick’s own personal tragedy. Together, they help each other to play “small ball,” to overcome “curses” and “bad luck,” and to deepen their hope in a better life ahead.

The Comeback Season by Jennifer E. Smith, shows that we all have to face curveballs in our lives, and that it’s up to us whether we duck away from the pitch or stand up and take a swing.