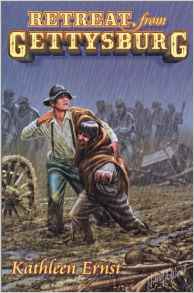 Fourteen-year-old Chigger O’Malley despises the Confederate Army, and with good reason. His father and three older brothers, who joined the Union Army’s famed Irish Brigade, have all been killed. As a result, his grieving mother is on the verge of a breakdown, and both are left without any means of support. To add to the misery, days of heavy rainfall leave the town of Williamsport, Maryland at the mercy of the swelling Potomac River.

Meanwhile, the Battle of Gettysburg has reached its bloody conclusion with a decisive Union victory. Slogging its way through the rain showers, the retreating Rebel Army heads south through Pennsylvania and into Maryland. There, they come to a halt at the flooded Potomac and frantically wait for the waters to recede. Wagons of wounded Confederates pour into Williamsport and fill up houses, churches, and other forms of shelter.

Chigger is disgusted by the very presence of the Rebels, and is furious when a wounded Confederate captain is forcefully placed under his mother’s care. Chigger’s only ray of hope is that the Confederates are trapped between the raging river and the approaching wave of the Union Army. In a matter of days, the war could be over. Yet days go by with no sign of an attack. As time begins to slip away, so do the Rebels. As the Potomac recedes, the Confederates construct a pontoon bridge and resume their retreat into Virginia.

While this is happening, Chigger is reluctantly getting to know the Rebel in his home. He soon sees Captain Tallard, not as a faceless monster who is responsible for his father and brother’s deaths, but as a caring human being who longs to see his own wife and two children again. As the last of the Confederate Army slips away, Chigger has a decision to make: should he prevent Captain Tallard from leaving so he can be taken prisoner, or should he help him continue his Retreat from Gettysburg?

Through the eyes of a conflicted boy, author Kathleen Ernst succeeds in showing that the Civil War was not a clear cut battle between good and evil, and that a simple act of kindness has the power to change lives.