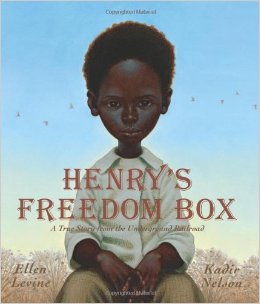 Henry Brown’s childhood is spent as a slave on a Virginia plantation. Although his master is a kind man and he is surrounded by family, Henry’s mother senses that something will happen to tear it all apart. Sure enough, one day the master decides to give the boy away to his son, who runs a factory. Eventually, Henry grows up, gets married, and starts his own family. And then, while he is at work, his wife and children are sold.

Lonely and frustrated, Henry decides that he sick of being controlled by others. He wants to be free! With the help of some friends and the Underground Railroad, he comes up with a plan so crazy that it just might work!

Henry’s Freedom Box: a True Story from the Underground Railroad, written by Ellen Levine and wonderfully illustrated by Kadir Nelson, is a heartbreaking look at how the practice of slavery devastated African-American families and drove some to great lengths to obtain freedom.