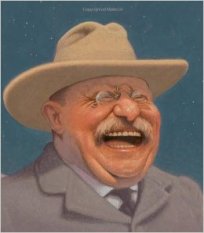 I didn’t comb through every reader review online to check for certain, but for those who read the book, did anyone notice the rather significant factual error in this book? If you didn’t, don’t feel bad, the School Library Journal and Booklist missed it too.

Here is the passage in question:

Roosevelt wanted to buy land in Panama
to build a canal connecting the Pacific and Atlantic Oceans.
Panama’s government refused.
When a local revolt started in 1903,
Roosevelt sent troops to help the rebels.
The rebels won.

Actually, it was Colombia that refused to make a deal. At the time, Panama was an unhappy Colombian province. When the Panamanian finally revolted, Roosevelt sent warships to fend off a potential Colombian invasion of the isthmus, but other than that, I don’t think U.S. troops actually took part in the fighting.

Other than the error, I thought this was a good book with wonderful illustrations. There’s nothing like reading about Theodore Roosevelt to make you feel like an underachiever in life!