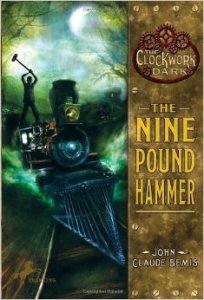 In 1890, Ray Hobb and his younger sister Sally are among the many orphans that are collected from the city streets on the East Coast and placed on a train bound for new homes, new families, and better lives in the Midwest. However, Ray is not so sure of his prospects. The lodestone, a gift from his missing father, is tugging him in a different direction than the orphan train is headed. Unobserved by others, Ray jumps from the train and follows the lodestone’s pull South.

Eventually, Ray is led to a traveling medicine show run by medicine man Peg Leg Nel. There, he meets a group of remarkable people with amazing talents; among them are Conker, the young strongman giant, Si, the contortionist escape artist, and Buck, the blind cowboy who can shoot with deadly accuracy. Through his hair-raising adventures with this unusual group, Ray learns of a deadly force of evil called the Gog, a centuries-old entity who seeks to take over the world through the use of his Machine. Ray is committed to bringing down the Gog and his henchmen, but does he have what it takes to defeat such a powerful force?

Filled with magic, pirates, and tall tale adventures, The Nine Pound Hammer, by John Claude Bemis is the first book of The Clockwork Dark series.