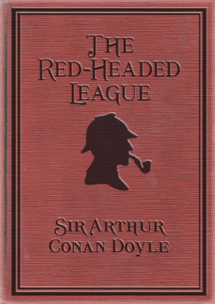 In his profession, Sherlock Holmes has encountered many strange cases, and this particular mystery is no exception. A red-headed man by the name of Jabez Wilson tells the detective and his companion Dr. Watson about a strange encounter with an organization known as the Red-Headed League.

Needing some extra income, Wilson responds to an ad in the newspaper put out by the League, requesting candidates for a job that is “purely nominal.” The only requirement is that the candidate must be red-headed. Lured by the 4 pounds-a-week salary, and strongly encouraged by his too-good-to-be true assistant, Wilson replies to this strange ad and is quickly hired. For the next eight weeks, his “purely nominal” job is to copy out of the Encyclopedia Britannica word for word four hours a day, every day. Despite the oddity of the situation, Wilson is content to perform his new job and get paid for it. Then without warning, the League suddenly disappears. After looking into the matter and finding more questions than answers, the confused red-head takes his case to 221 Baker Street.

The whole episode baffles Wilson and Dr. Watson, but Sherlock Holmes is unfazed. “‘As a rule,’ said Holmes, ‘the more bizarre a thing is the less mysterious it proves to be.’” With that, he is on the case. Piece together the clues and see how Sherlock Holmes uses keen observation and deductive reasoning to solve the mystery of The Red-Headed League.