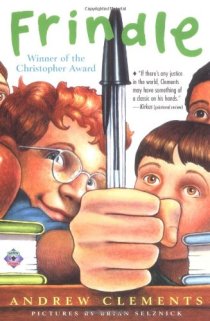 If you asked the kids and teachers at Lincoln Elementary School to make three lists-all the really bad kids, all the really smart kids, and all the really good kids-Nick Allen would not be on any of them. Nick deserved a list all his own, and everyone knew it.

Nick Allen is not a trouble maker; at least he doesn’t try to be. It’s just that he gets a lot of great ideas and always wants to put them into action. For example, in third grade, it’s his idea to turn his classroom into a tropical island, complete with sandy floors! In fourth grade, Nick discovers the ability to whistle like a bird in class without his teacher finding out who it is that’s doing it.

Fifth grade, however, will prove to be different. Teachers are a little more serious now. One teacher who proves to be the toughest challenge to Nick’s creative outbursts is Mrs. Granger. She teaches English, loves the dictionary and the rules of language, and is much too clever to be outfoxed by any student. This doesn’t stop Nick as he tries one scheme after another in an effort to get one past “The Lone Granger.”

After a conversation with Mrs. Granger about how words are created and added to the dictionary, Nick comes up with a plan. He and his friends decide that from now on, they will call pens “frindles,” and hope that the new word catches on. “Frindle”-mania does catch on and soon sweeps through the school. As Nick expects, Mrs. Granger is not pleased with this, but Nick can’t stop the fad now, even if he wants to; it has gotten too big! The whole town is on a “frindle” craze, and that’s just the beginning! Find out just how far Nick’s big idea takes him when you read Frindle by Andrew Clements.