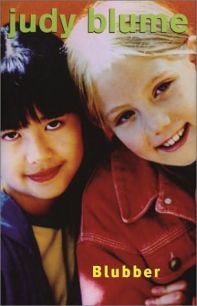 Needless to say, the issue of bullying is a hot and relevant topic, which is the one strength of this Judy Blume book.

Yet all I could think of as I progressed through this story was just how much I detested each and every character in it. Perhaps Blume was going for the gritty realism angle and emphasising that not every ending is happy or neatly resolved. This idea is also reinforced by the numerous cynical reviews I’ve read by teachers who say “Hey, that’s real life,” or “I’ve seen worse.”

Still, I struggled to look for someone, ANYONE to rest my sympathies on. It was clearly not going to be Jill, who was more than willing to join in the remorsely teasing of her classmate Linda. Even when she herself had briefly become the target of bullying, Jill never seemed to develop a sense of empathy for what Linda had been going through.

As for Linda, I sympathised with her up until the guns were turned on Jill, at which point she happily joined the bully bandwagon (Apparently, she learned nothing from the experience either). Jill’s best friend Tracy was a marginally better character, although she was perfectly content in joining her friend in stuffing a neighbor’s mailbox with rotten eggs and peeing on his lawn because he had the temerity to be mean, and (oh the horrors!) never donating to UNICEF.

Then…there were the adults (teachers, parents, bus driver, etc.) who proved to be virtually negligent in addressing, or even acknowledging, the matter.

Finally, call me old-fashioned, crazy, ignorant, out-of-touch (or whatever label is en vogue for the ivory tower progressives out there), but I still think morality matters.