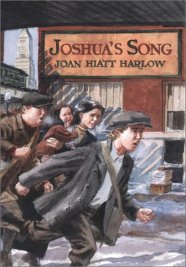 What a difference a year makes! In 1918, Joshua Harper is attending an upscale academy in Boston, singing solos in boy’s choir, and enjoying life as a young “Boston Brahmin.” By 1919, everything changes. An influenza epidemic sweeps through the country, taking thousands of people with it including Josh’s father. As a result of his voice beginning to change, Josh is dismissed from the boy’s choir. Now, he needs to quit school in order to get a job to support himself and his mother.

It is quite by accident that Josh stumbles into his new job as a newspaper boy for the Boston Traveler. He is quickly put to work by a tough-talking, street-wise kid by the name of Charlestown Charlie. Although the job of “newsie” is considered beneath him on the social scale, Josh takes to his job immediately. With the help of his new friend, and Traveler editor, Marc Muggeridge, Josh’s job prospects increase, much to the displeasure of the jealous Charlie. When things finally come to a head between the two competitors, something happens to bring them together in a way that is unbelievable and tragic.

As a result of poor maintenance, and a sudden swing in temperature, a 55 foot high steel tank explodes, sending almost 2 ½ million gallons of molasses crashing through the streets of upper Boston, sweeping away buildings, destroying everything in its path, and swallowing up people and animals who could not outrun the huge waves. In the midst of this bizarre disaster, Josh and Charlie work together in an effort to try to save lives.

The “Great Molasses Disaster,” on which this novel is based, seems too strange to be true, but it actually happened! Although the characters in Joshua’s Song are fictional, the story of the disaster (which killed 21 people and injured 150) is a true-to-life account. Today’s Bostonians also say that if you walk the streets of North End Boston on a hot summer day, you can still smell the molasses that remain underneath the streets. Whether this is true or not, you would have to go to Boston to find out.