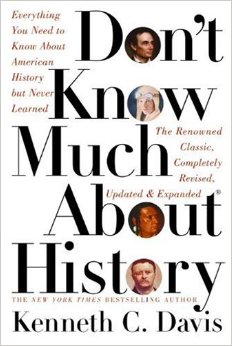 “It is interesting to me that my work [is] sometimes described as ‘liberal,'” Kenneth C. Davis wrote in the introduction to the revised edition of this book. “But I like to think of myself as an equal opportunity basher, eager to reveal the failures on both sides of the political aisle.” And bash he did. There were few survivors…

Although I did notice a certain slant to Davis’ work (even without the introductory heads-up), I don’t know if I would necessarily say that it was strictly liberal, but more of a revisionist slant. Of course, some believe that “historical revisionism” and liberalism are mutually linked. Liberals are often lambasted as Debbie Downer revisionists who want to tarnish cherished historical icons/events and to shovel the “white guilt” around.

However, revision to the historical record can be a good thing. New information is discovered all the time that changes what we currently know. As historian James McPherson once stated:

[R]evision is the lifeblood of historical scholarship…Interpretations of the past are subject to change in response to new evidence, new questions asked of the evidence, new perspectives gained by the passage of time. There is no single, eternal, and immutable “truth” about past events and their meaning. The unending quest of historians for understanding the past—that is, “revisionism”—is what makes history vital and meaningful.

Although Davis might be a revisionist, he does take a couple of swipes at the practice of revisionism himself. For example, he clearly shows his displeasure with Hollywood history films, citing Disney’s Pocahontas and Oliver Stone’s JFK. And forget about bringing up Parson Weems and his George Washington “biography.”

Overall, I liked the book. Anytime I can learn something new historically, I consider it a good thing. Also, I like seeing history from different perspectives, even the ones that I don’t agree with.