It was 11 am local time when we landed in Keflavik, Iceland. We disembarked into overcast, 40-degree (Fahrenheit) weather, although I didn’t notice it initially because I was overjoyed by the return of blood flow to my legs. Once inside the terminal, I was struck by just how quiet and orderly the Keflavik airport was. No shouting, no running around, everyone obediently lining up. I had a similar experience while I was with a group of Americans at the airport in Amsterdam. You always knew where the Americans were in the airport—they’d be the ones making the loudest noise! However, Tim and I wanted to show good decorum and to be good representatives of our country. So, we quietly and orderly shoved people out of our way, sometimes remembering to hiss “Excuse me” in English, because, hey, everyone knows English, right? I just can’t imagine why the world hates us…

I quickly learned the monetary difference between the U.S. dollar and the Icelandic krona when I paid my first visit to an ATM.

When prompted, I hit what I though was the button for 20 kronas. It wasn’t 20 kronas…it was 20,000! I stared aghast at the wad of bills I received from the machine! I was afraid that I had changed over every last cent I possessed into foreign currency. However, after some quick Googling, we discovered that this amount was the equivalent of about $182.

Our next task was to pick up our rental car. With the rental stores located some distance from the terminal, we had to wait in line for a shuttle bus. Normally, this wouldn’t have been so bad, except that all the customers were forced to wait outside with very little structural protection from the stiff wind blowing off of the ocean.

The line was also very long… aaaand there was only one bus running. We grimly watched as the shuttle pulled up, filled with people, and drove away with the remainder of us hopping in place, trying to keep warm. On the shuttle bus’s second go-round, we were finally able to wedge ourselves and our carry-on luggage into the vehicle. An hour later, we had gotten our car and were soon cruising the streets of Keflavik. I was pleasantly surprised by the fact that they drove on the right side of the road in Iceland. I only had to adjust to the large numbers of roundabouts within town.

It was about lunchtime, and Tim and I were eager to sample the Icelandic cuisine. So, we stopped off at the Olsen Olsen Restaurant

where I got…a chili cheese dog with bacon and a side of onion rings. All right, so I’m not one to plunge head-first into a new culture. There is some easing to be done. Overall, it was a very good lunch. It should have been considering I shelled out 3,000 kronas for it!

After our meal, we made a visit to nearby Stekkjarkot, a restored 19th century house.

We didn’t stay long because a steady rain had begun to fall. Having recently bought a travel umbrella, I thought this would be the opportune time to use it. Then a huge gust of wind from the sea nearly had me doing a Mary Poppins impression over the city. Accepting defeat, I put away the umbrella and got rained on.

South of Keflavik lay the tiny community of Harfir where our first Airbnb host house was located. We were immediately greeted by Anna, who quickly set us up in one of her spare rooms. We had a nice conversation and Anna gave us some sight-seeing recommendations. She was also very amused at my umbrella fiasco. “We don’t use umbrellas here,” she laughed. Lesson learned.

Tim was eager to start exploring but I talked him into taking a nap first. Despite not having my CPAP, I had a very refreshing sleep. Several hours later and feeling more rejuvenated, we continued traveling south until we arrived at the Bridge Across the Continents.

As it turned out, Iceland was formed between the North American and the Eurasian tectonic plates. The country was literally being ripped in two. So, we visited the rip and the wooden bridge that crossed it. Again, we had to make our stay short because the weather had gotten even worse since our arrival to Iceland. The land around the growing chasm (and as far as the eye could see) was black with volcanic rock. 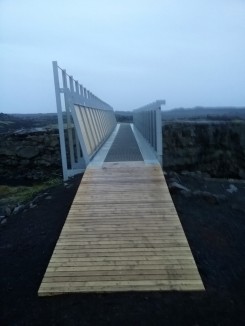 One could imagine being on the surface of the moon. The scenery was magnificent desolation. The cold, hard-driving rain beating upon Tim and me was adding to our own desolation, so we decided to continue our journey around the southern coastline. We stopped for dinner in Grindavik at a cozy place called the Bryggjan Café.

While the rain continued to fall, Tim and I enjoyed several bowls of lobster soup along with warm brown bread and butter. It was a meal that hit the spot considering the weather!