Disclaimer: There is a fun little poll at the end of this post. Please take it. I’d like to see your opinions!

I began the day touring downtown New Ulm, a bastion of German heritage in a state renowned for its prominent Scandinavian legacy.

Many of the original inhabitants of New Ulm came from Bavaria. During the mid-1850s, two groups of Bavarian German immigrants had separately made their way from Chicago and Cincinnati respectively to establish a community on the outskirts of the Minnesotan frontier, land that until recently had been occupied by the Dakota Sioux. Beginning in August of 1862, the Dakotas, upset with the unfair treatment at the hands of Indian agents and facing potential hardship, began attacking settlement along the Minnesota River valley.

On August 19, the Dakotas set their sights on New Ulm but were held off by hastily erected barricades and a handful of armed citizens. On the 23rd, the Dakotas attacked again, this time in greater force. However, reinforcements had also come for New Ulm as well. The natives were held off by the militia and withdrew the following day. Despite the victory, much damage had been done to the town and with a shortage of food and ammunition, it was decided that the residents would temporarily evacuate to Mankato, 30 miles to the east.

I read a few of the historical signs as I strolled up and down the streets of the historic district, admiring some of the old buildings. I paid a visit to the German-Bohemian Immigrants Monument which overlooked German Park. I then attended the 12:00 performance of the New Ulm Glockenspiel along with a busload of eager tourists.

By definition, a “glockenspiel” is a percussion instrument, similar to a xylophone, except that the bars of the glockenspiel are made of metal, not wood. In the case of New Ulm, this particular instrument was housed within a clock tower surrounded by a well-tended plaza. On the stroke of twelve, the bell-like tune began to play. 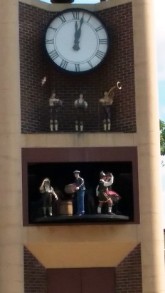 Halfway down the tower, a door opened up, a platform moved out and numerous animatronic people, dressed in various historical costumes slowly spun around the platform, jerkily waving their arms to the music. It was ten minutes of shear Teutonic delight.

Feeling inspired and wanting to celebrate my own German roots, I stopped in at Veigel’s Kaiserhoff restaurant to have myself an authentic German meal.

To my everlasting shame, I had gone almost 38 years never having had an authentic German meal. Wishing to right this wrong, I marched into the restaurant, slid into a booth, grabbed the menu, and perused the German Specialties. Not knowing what any of the meals were, I picked the first thing that caught my eye: Wiener Schnitzel. Here is where my ignorance first comes into play. I had always thought that Wiener Schnitzel was some kind of a meal composed of sausage.

“Ach ja,” my inner monologue crowed in a stereotypical German accent while I waited for my food, “ve are going to haf sum Schnitzel like a real German!”

Yeah well, if I were a “real German,” I would have known right off the bat that sausage had nothing to do with the meal. Wiener Schnitzel turned out to be a breaded veal cutlet served with thick gravy, red cabbage and spaetzles (a doughy-textured egg noodle). It turned out to be a very good meal, the various flavors and textures complementing each other nicely. Despite my earlier show of stupidity, eating this meal made me feel very cultured and worldly. (“Ah yes, Wiener Schnitzel. I’m quite familiar with this culinary delight. Have you tried the Schnitzel at the Kaiserhoff? No? Well, then you haven’t lived!”). Out of curiosity, I looked up Wiener Schnitzel on the internet some time later. It turned out that the meal was not so much German as it was Austrian, “Wiener” meaning “Viennese.” So much for being cultured…

There was a lot more to see in New Ulm. There was the Hermann Heights Monument, the Wanda Gag House, the Minnesota Music Hall of Fame, and a number of parks in and around the town. Unfortunately, my time was short and I wasn’t able to visit these places. New Ulm, I decided, would definitely be worth a second visit in the future.

I departed New Ulm and headed west to Walnut Grove. For aficionados of the Little House on the Prairie TV series, yes, that Walnut Grove. Having worked in the children’s department of a public library of a number of years, I felt a need to pay homage to the Ingalls with a visit to the Laura Ingalls Wilder Museum.

As museums go, it was all right. In addition to the main exhibits, there were also a number of reconstructed 19th century buildings to pop in and visit (a schoolhouse, a church, a sod house, etc.) It was the sort of place you would visit on a school field trip, like New Salem, IL was for me and my classmates. I was surprised to learn that as a young man, Charles “Pa” Ingalls and his family had once lived in Kane County, not far from where I currently lived!

What? As a history nerd and children literature book worm, how did this fact escape me?

From Walnut Grove, I continued south and west toward Mitchell, South Dakota. As I have stated in previous journals, my ultimate travel goal has always been to visit all 50 states. As I crossed the border into South Dakota, I was happily able to add it as my 41st, although this accomplishment was a little premature.

I have certain rules in determining as to whether I have “officially” visited a state. If I had merely driven into South Dakota, turned around and went back over the border, I wouldn’t have counted it. Something like that happened a number of years ago when my college drama team was performing in southwestern Colorado. Having an off day, our team piled into our 15 passenger van and began sight-seeing. Upon hearing that me and a friend had never been to Utah, our drama director drove us five minutes into the state. Then we pulled over, got out of the van for a minute, got back in, and drove back to Colorado. I had never counted that as an official visit to Utah.

My inexpert opinion was that you had to actually do something in a newly visited state. Of course, this produced a lot of gray areas. What defined doing something? Stopping for gas? Eating at a restaurant? Making a purchase?

I had another new experience on the way to Mitchell: the 80 MPH speed limit. Not that I haven’t gone that fast before…just not, er, legally. Still, I was a bit intimidated to drive that fast at first, as if this were some sort of a South Dakotan prank:

Me (after getting pulled over): But officer, the signs say 80!

My sense of adventure was bolstered by my ever-shuffling IPod which began to play the theme from Back to the Future. At that point, what could I do? I cranked up the volume, and for the remainder of the song, I drove 88 MPH.

Sadly, my flux capacitor wasn’t fluxing at the time and I remained in the present. However, with no cops (or Libyan terrorists) chasing me, I became a lot more comfortable with my driving speed.

I arrived at the Lake Mitchell Campground in the early evening. After getting a bit turned around, I was able to find my reserved campsite. In defiance of the doughy white boy persona that I have so carefully cultivated over the years, I was able to successfully erect my tent with minimal cursing involved.

My first real problem came when I inflated my queen-sized air mattress and tried to get it into my tent. Now, mind you, I had purchased a two-man tent. I would have figured that a mattress of this size would easily slip in.

I’m sure I amused some of my fellow campers as I tried in vain to defy the laws of physics by jamming in that stupid mattress. Drenched in sweat and conceding defeat, I deflated the thing and determined to really rough it by only using my sleeping bag. Oh, that and my CPAP machine plugged in to a nearby electrical outlet which was just steps away from the bathroom and shower facility (Don’t judge me).

Seeing signs for a swimming beach, I changed into my swimsuit and made my way down a steep set of stairs that wound through the woods, finally opening up to the lake. The sun was starting to set as I gratefully slipped into the water, still warm from the day’s heat. The small secluded beach was hemmed in by the wooded hills behind it. On either side of the beach were rocky outcrops that ran around the edge of the lake. These rocks glowed a warm pink as the sun began its descent, the tree line along the western shore. After several long days of driving, it was absolute bliss to float, swim and to watch the sunset. Strangely, despite a campsite full of people beyond the wooded hill, no one else had thought to come down. A shame, really. They missed out on something beautiful. For me, this would be one of those times and places that I could look back on and smile with contentment. I only wish I had my camera with me at that point.

As dusk fell, I reluctantly got out of the water, climbed back up the stairs and headed to the showers. My next bit of camping adventure was to make a fire. I didn’t have a vast amount of practical experience building campfires but I had a theoretical knowledge of how it was done (said the nerd). I stacked the wood just so, allowing for plenty of ventilation and laid out some kindling beneath it which went up in flames without a problem. Then the kindling burned out without igniting the logs. Having used up my kindling, I started to improvise. I lit up twigs, paper, cardboard, even wads of paper towels in an effort to maintain a flame. It had grown dark by now and I was about to chalk it up as another defeat when the wood, rather reluctantly I thought, began to burn on its own.

I had created fire.

Once I burned through my first bundle of fire wood, I called it a night and crawled into my tent.

Now, as I said before, this was a two-man tent. It said so right on the bag. I was one man (okay, maybe a case could be made for me being one and a half men). Yet apparently, the two men that the tent designers had in mind must have been pigmies. Not being a pigmy by any stretch of the imagination, I could barely fit inside! I ended up having to lie diagonally across the floor of the tent, and even then my head was mashed up along one tent wall while my feet were threatening to punch through the opposite wall. I can’t say that I passed a very comfortable night.