We got an early start to our day. We packed up and were on the road to Galway by 9 a.m. Once we got into the city, we stopped for breakfast at a little Irish

place called…McDonald’s. Yes, that McDonald’s (they have ‘em in Ireland too). The big difference I discovered between their restaurants and ours was that instead of going up to the counter and ordering, customers had the ability to place their order at a kiosk, which I thought was a pretty slick system.

With coffee in hand, we braved the damp weather

and explored the streets of Galway. As has always been my custom, I paid a visit to the local bookstore, and couldn’t leave it empty-handed. In my defense, I only purchased two books, which shows a great deal of restraint on my part! Overall, I found Galway to be very similar to Limerick with its combination of traditional architecture and modern merchandising. Live musicians played on the brick-paved streets in the midst of the bustling morning crowds.

Before heading out of town towards our next adventure, Tim stopped for gas…and a haircut. For the past week, Tim had been deliberating on whether to pay a visit to a barber. I suppose that was why I found myself noting an overwhelming number of shops in operation throughout Ireland, particularly Turkish barbers. I didn’t know with any certainty a difference between an everyday, run-of-the-mill Irish barber and one of the Turkish variety. Perhaps the Turks have cornered the market in barbering, and that their hair-cutting methods are superior in quality (these are the things that keep me up at night). Tim opted for a barber that was next to the gas station (very handy, I must say). It was not labeled as a Turkish barber shop, but Tim received a good haircut just the same.

Our next stop was the beautiful little village of Cong,

the backdrop for much of the John Wayne film (pronounced “fillem” by our tour guide) The Quiet Man. It had been a while since I’ve seen the movie…I’m sorry, fillem…but it was one of my Dad’s favorites. My parents used to have good-natured arguments over The Quiet Man during every St. Patrick’s Day holiday. It used to drive my Mom crazy that John Wayne’s character would never explain to Maureen O’Hara’s character his reluctance to fight. But then, if he had, there wouldn’t have been anything to make a movie on, so…

We saw various houses and 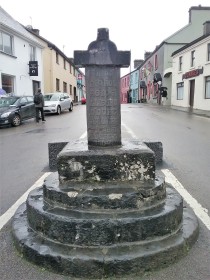 buildings that were included in the…fillem, including Pat Cohan’s Bar, which was where Tim and I had our lunch. Our guide also pointed out an old stone road sign in the center of town that had been there for generations. It was marked with an old Irish inscription. The guide interpreted it as “John Wayne drank here.”

I have my doubts.

We also took time to examine the ruins of Cong Abbey, destroyed hundreds of years ago by people who were not forward-thinking architectural preservationists. Despite its dilapidated state, it was quite a beautiful place to visit.

We concluded our day’s journey by trying to find our host home in Letterkenny and getting lost in the process. Fortunately, the host was nice enough to come find us at a local gas station, and we followed him back to his home. Our rented space was pretty much a two-bedroom apartment, with all the amenities, including a washer and dryer which was dearly needed at this point in our trip.